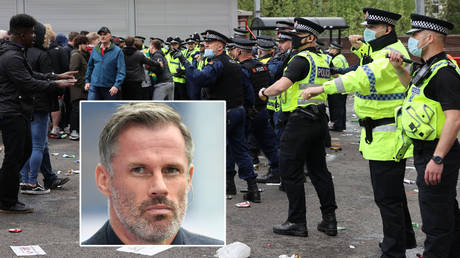 Sunday’s scenes at Old Trafford have received the backing of ex-Liverpool defender Jamie Carragher, who says that the voices of the majority of protesters should be heard despite reports emerging of serious clashes with police.

Carragher hasn’t traditionally been seen in much of a positive light by the Manchester United faithful for much of his playing and broadcasting career, but the iconic former Liverpool center-half has thrown his considerable weight behind the demonstration outside the famous stadium ahead of Sunday’s game with Liverpool.

The fixture was postponed an hour after the scheduled kick-off time following a mass fan demonstration protesting against the club’s ownership by the US-based Glazer family outside the stadium, continuing into the arena with hundreds of supporters invading the pitch, some of whom were seen to ignite flares.

Despite the discontent among the fanbase ultimately causing the most famous fixture in English football to be called off, Carragher was vociferous in backing the rights of the irate fanbase to make their feelings known. 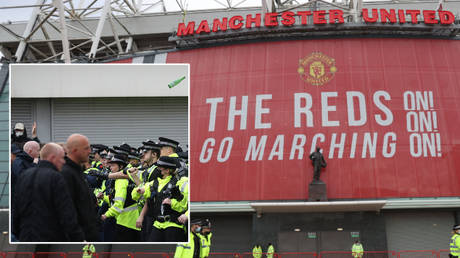 “Let’s not get away with why this has been done,” he said, speaking on Sky Sports.

“Any other supporters in this position would have done it. There will always be a few idiots. But let’s not the forget the main reason why they did this.“

Those “idiots” to whom Carragher refers will likely generate more than a few column inches in the coming hours and days.

It has been reported that a minority of the protesting fans engaged police in what was described as “violent clashes“, with one police officer seen on the Sky Sports broadcast with a cut near his left eye and blood streaming down his cheek.

In another statement, Greater Manchester Police said that three police officers were injured in clashes with United supporters – with one being attacked with a glass bottle and requiring “emergency hospital treatment“.

“Those in the stadium were evicted by officers but outside on the forecourt hostility grew, with bottles and barriers being thrown at officers and horses,” the statement read. “Two officers have been injured with one officer being attacked with a bottle and sustaining a significant slash wound to his face, requiring emergency hospital treatment.

Chief Constable Russ Jackson, of the authority, added his voice to the issue, saying that he understood fans’ “passion” while warning that many of the protestors had no intention of demonstrating peacefully.

Peaceful according to Sky Sports. pic.twitter.com/B78uyIxQ5D

“We understand the passion many supporters have for their team and we fully respect the right for peaceful protest,” said Jackson. “Plans were in place to ensure this could happen safely, but it soon became clear that many present had no intention of doing so peacefully.

“The actions of those today required us to take officers from front line policing and call in support from neighbouring forces to prevent the disorder getting worse. At different points, bottles and barriers were thrown, officers assaulted and people scaled the stadium structure, creating risk for themselves and officers.“

The statement also hit out at the 100 or so fans who they said “aggressive and antagonistic” towards police and security staff, with several United employees forced to lock themselves in offices for their own safety.

According to reports from in or around the stadium – and at The Lowry Hotel, which also saw scenes of unrest – the majority of protestors and demonstrators were entirely peaceful. But as is so often the case in instances of mass protests, the actions of the five percent appear to have entirely undermined those of the 95 percent. 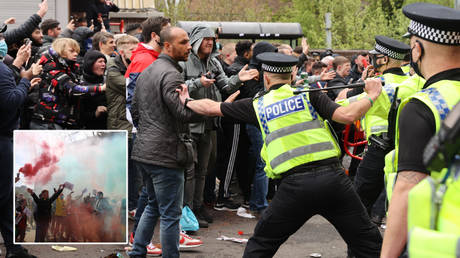 Source: ‘Any supporter would have done it’: Ex-pro Carragher backs United protest despite reports of ‘serious clashes with police’ (VIDEO)