Boris Johnson must quit if he has broken the ministerial code over his lavish flat makeover, the Scottish Tory leader says.

Asked if he should resign if rules were broken – the same demand he made of Nicola Sturgeon – Douglas Ross replied: “Of course.”

The explosive warning came after Dominic Raab, the foreign secretary, admitted he had “no idea” if Mr Johnson sought a Tory donor to pay his childcare bills, as claimed.

Mr Raab also failed to deny the flat redecorations cost as much as £200,000 – and that a second payment was sought from an unknown donor to cover the cost.

Mr Ross, who led calls for the SNP first minister to go over the Alex Salmond controversy, was asked if he believed Mr Johnson should suffer the same fate, if the code was broken. 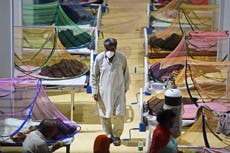 “I think people expect the highest standards of those in the highest office of the land, and that’s why I think people are looking at the investigations that are currently ongoing and waiting for the answers,” he told the BBC’s Andrew Marr Programme.

Mr Johnson is facing up to four inquiries, after repeatedly failing to deny that the Conservative Party originally funded the costly refurbishment of the Downing Street flat.

It is believed the party secretly approved paying a £58,000 bill as long as nine months ago – a payment then covered by a wealthy donor, according to a leaked email.

He is also under fire for refusing to commit to publishing the findings of his new adviser’s investigation into the affair – despite criticism that he is making himself “judge and jury”.

But Mr Raab defended the prime minister being “the ultimate arbiter of the ministerial code”, saying: “There’s no separate body or individual that will have power over him. That’s why we have elections.”

The foreign secretary also described the prime minister’s fate as “hypothetical speculation”, while insisting he had “followed the codes of conduct”.

“I think the right thing for me to do is respect the integrity of those reviews and let them run their course – rather than commenting that what may or may not be found,” he insisted.

Lisa Nandy, Labour’s shadow foreign secretary, said the public did not need to have the inquiries to know to know Mr Johnson is “withholding information” about who originally funded the renovations.

“It’s appalling we are in a position where he won’t come clean about who loaned him money or gave him money, and what favours or promises may have been given in return,” she told Sky’s Sophy Ridge on Sunday.

“We already know that this is a prime minister who frankly thinks that the rules don’t apply to him and his friends.