Would you prefer Alexa speak a language other than English? As of March 2020, Alexa can speak in eight different languages. Whether you’re a native speaker or you just prefer to hear a different language, you can choose which language you want Alexa to communicate with.

Amazon makes it easy to change Alexa’s language. There are several ways to do this, and you aren’t limited to just a single language–Alexa can speak more than one language at a time. Here’s how to make the change.

What Languages Does Alexa Speak?

At the time of writing, Alexa can speak in eight different languages and several dialects. If the language you want isn’t one of them, don’t give up–Amazon constantly brings more languages and support to the Alexa platform, so there is a good chance any major language will be added in the future.

How to Change Alexa’s Language

If you decide to change Alexa’s language, you’ll need to do so device-by-device. You can’t change all of your devices at once. The good news is, it’s easy to make the change no matter which Echo device you use.

First, open the Alexa app. Tap More > Settings > Device Settings and select the Echo device you want to change. Scroll down and tap Language, and then select the language you want to use. The options are divided into two sections.

If you choose a language that isn’t supported, you will receive a warning that says “The selected language does not match your Amazon Account and is not fully supported in your country.” Tap OK to continue and finalize the change.

If you don’t like the way the new language works with Alexa, just follow the above steps to change the language back to English.

One thing to note is that there are multiple versions of English that you can swap between. For example, you might want Alexa to speak with a British or Australian accent. Don’t be afraid to play around with the language options until you find the one that best suits you.

How to Turn On Bilingual Mode

Alexa is capable of speaking two languages at once. Once activated, all you have to do is speak to Alexa in one of the two languages and it will respond in turn. For example, you can ask a question in Spanish and receive an answer in Spanish.

Think of it a bit like Whisper Mode, Alexa’s intelligent response algorithm. If you speak to Alexa in a whisper, she will respond quietly. If you speak in a normal voice, she responds at normal volume. 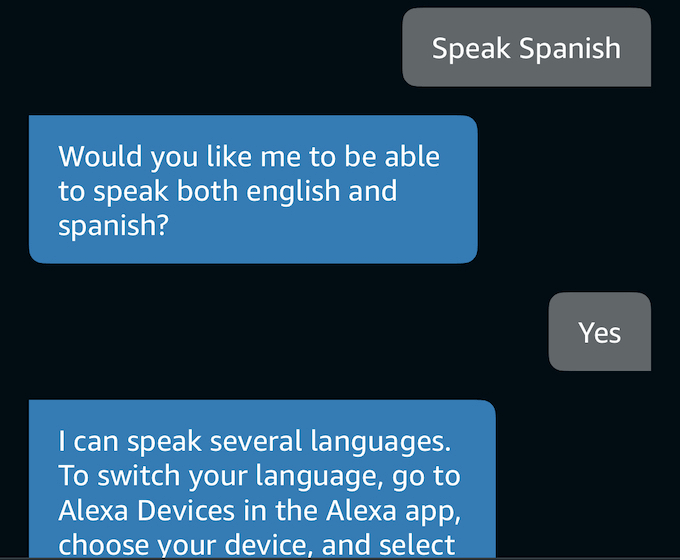 In the same way, Alexa is able to differentiate between different languages and speakers and respond accordingly. You can ask a question in English and receive an answer in English, while someone else can speak Spanish and receive a Spanish-language answer.

To activate this mode, just say “Alexa, speak English and Spanish.” When you speak to Alexa in English, she will respond in English, and vice-versa with Spanish. However, on-screen text is displayed in the primary language.

If at any point you want Alexa to stop speaking the second language, just say, “Alexa, stop speaking Spanish (or whichever language you chose.)” This will restore Alexa to the default language–in most cases, English.

Although the process to change Alexa’s language is easy, you might not see the point. After all, why have Alexa speak another language other than your own? There are a few reasons.

The first is if you have a family member who doesn’t speak English, you can give them the ability to use Alexa. If they are visiting from abroad, it’s an easy way to make them feel a bit more welcome in what might be a strange country. For example, they could order takeout, get directions to local attractions, and more. All using their own language.

The second reason is that it gives you an easy way to practice a second language. If you’re trying to learn one of the supported languages, talking to Alexa is one way to test your pronunciation. If Alexa understands your request, you know you’re on the right track.

If you aren’t satisfied with the language on your Echo or you just want Alexa to be multilingual, follow the steps above to change the language. It won’t take long, and if you don’t like it, well–you can always change it back.

Source: How to Change Alexa Language to Spanish and Other Languages

’I Was Addicted To The High’: I Became An Influencer As A Joke - Then It Nearly Broke Me