It was April Fools’ Day, but the sight of veteran NBA 3-point shooter JJ Redick in a Dallas Mavericks warm-up shirt was no joke.

Neither was his proclamation that he was ready to play ball.

“I’ve not played a basketball game since March 3, I think, so I’m itching to get back out on the court and compete in games,” Redick told the Dallas media in his first Zoom call since joining the team about a week earlier. A heel problem suffered in New Orleans had kept him out of his last eight games as a Pelican.

“I love playing. I want to play as many games as possible and try to help this team.”

Nine days later, as he ramped up practice and player contact, Redick reiterated his desire to return to the court.

“The antsiness is real right now. I’m anxious to play. I want to help this team.”

Redick debuted for the Mavs on April 12, and in the 10 games he’s played, he has provided a spark to the team from off the bench. He is already leading the team — surprise, surprise — in 3-point percentage at 43.3. He’s averaging 4.9 points per game in limited minutes so far.

Redick even hit a milestone, scoring his 12,000th career point and making his 4,000th career field goal on a 20-foot jumper at the start of the second quarter in the team’s April 22 win over the Los Angeles Lakers.

At the age of 36, the 15-year NBA veteran still has plenty left in the tank, and he’s gassed up and ready to help the Mavs push through in the playoffs.

The Old Man and his three have arrived in Big D.

Dallas added Redick on March 25, acquiring him and forward/center Nicolò Melli from New Orleans for Wesley Iwundu, James Johnson and a second-round draft pick. With the Pelicans, Redick averaged 8.7 points, 1.7 rebounds, 1.3 assists and 18.6 minutes in 31 games off the bench.  Over his career, the 6-foot-3 shooting guard had averaged 12.9 points, 2.0 rebounds, 2.0 assists and 25.7 minutes in 927 games (488 starts) for the Pelicans, 76ers, Clippers, Bucks and Magic. Throughout his stints, including this most recent one, he’s shooting 44.7 percent from the field and 89.2 percent from the free-throw line.

But where Redick has excelled most, of course, has been from behind the arc.

A career 41.5 percent 3-point shooter, Redick came in second in the NBA in 3-point percentage last season behind George Hill, and he led the league in 2015-16.

Redick has been an ideal shooter for this three-heavy version of the NBA. He has taken more than half of his shots from downtown in eight of his 15 seasons, and only once did his 3-point-attempt rate fall below 40 percent.<a class="espn-footnote-link" data-footnote-id="3" href="#fn-3" data-footnote-content="

“>3 As the league rate has skyrocketed over the past decade, Redick’s rate has climbed, too — and this season, he has taken a career-high 65.9 percent of his shots from three. 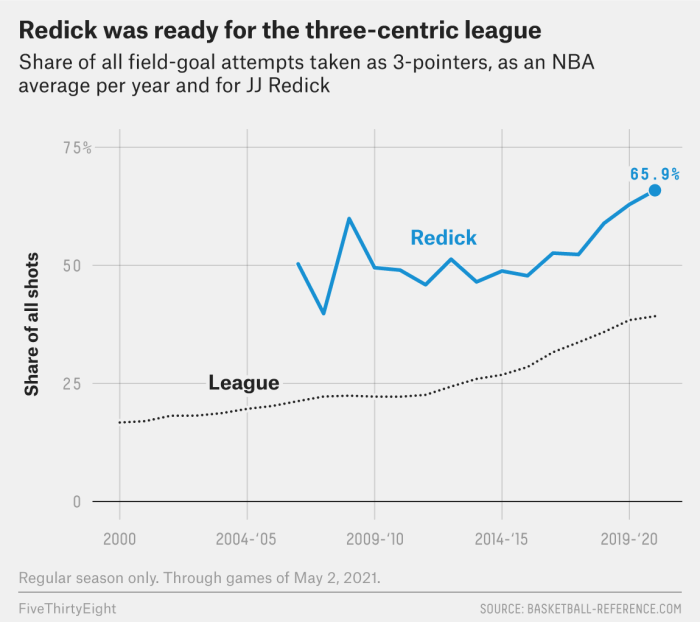 To still be in the league after 15 years — and playing and contributing to teams at a high level — is an accomplishment that Redick acknowledges as he shares how he evolved in the game.

“I’ve always recognized that the game evolves, so your own game has to figure out how to evolve as well within the NBA game. I think I came into the league being a good shooter, and I got better as a shooter and I feel like I improved on the margins, on all the other stuff,” he said.

Redick has joined the Mavs in spurts off the bench and been effective when he’s played, such as during the team’s April 24 win against the Lakers. He scored 8 points, including a couple of late-game threes to help seal the victory.

He knows his ability to help the team even more will increase as he gets acclimated and inserted regularly into the team’s fluid rotation, allowing him to get even more comfortable as a role player. “I’m like a lot of basketball players. I’m a rhythm player. I want to be in a good rhythm going into the playoffs.”

And he knows exactly what the postseason takes. He reached the NBA playoffs in each of his first 13 seasons in the league, averaging 10.9 points in 110 postseason games (70 starts) with the Sixers, Clippers, Bucks and Magic.

It’s his veteran status and playoff experience that the Mavs are hoping will help propel them into a deep playoff run.

The Mavericks currently hold the sixth seed in the Western Conference with a record of 36-28. They’re right on the line of the NBA’s play-in scenario — something that the team would like to avoid. “I would like to be out of the play-in game,” Redick said. “That would be cool to not have to deal with that and the extra stress of having to play maybe an extra game or two.”

Head coach Rick Carlise marvels at what a longtime player like Redick can bring to his young team.

“He brings an intensity, experience, he brings, really, a historic skill,” Carlisle said.  “If you look at his 3-point shooting, in the history of the game, he’s one of the best ever.”

The old man hits a lot of 3s

Top 20 players in career 3-pointers made in NBA history

“I love the way he approaches his preparation. He really is a very intense machine-like worker. His experience makes it easy for him to pick things up within a different system,” Carlisle continued. “A guy like that is always good for the culture of your team.”

In addition to his experience and leadership, Redick also brings elite shooting and floor-spacing skills that can help his teammates knock down shots. “And hopefully being a voice of leadership and reason and going out there and competing and helping this team win games,” Redick said of what he’ll contribute to the team.

“I’ve set a lot of ball screens as the screener. The threat of my shot opens things up for guys.”

Redick’s trade to Dallas is already paying off, but it wasn’t all fun and games at first. Shortly after he was traded, Redick took to his popular podcast, The Old Man and the Three, to call out Pelicans executive David Griffin for “not honoring his word” by allowing him to choose where he would be traded if the situation arose.

On the podcast, he admitted that while he had a desire to play for the Mavs, he was shocked he had been traded to the team. His wife and two young children live in Brooklyn, and Redick said that before the start of the NBA season, he had asked Griffin, executive vice president of basketball operations for New Orleans, for a trade to a team in the Northeast.

In a Mavs.com article rehashing the podcast conversation, Redick laid it out: “Griff basically says to me, ‘Come down for a month, if you still want to be traded, I give you my word I’ll get you to a situation that you like.’ … Obviously he did not honor his word. And again, that is not a slight on Dallas at all.”

Now that he’s in Dallas, though, Redick is excited for the possibilities. “This is a great situation basketball-wise. I think it will be a lot of fun. I’m hoping I can really help this team and contribute to winning and hopefully a long playoff run.” 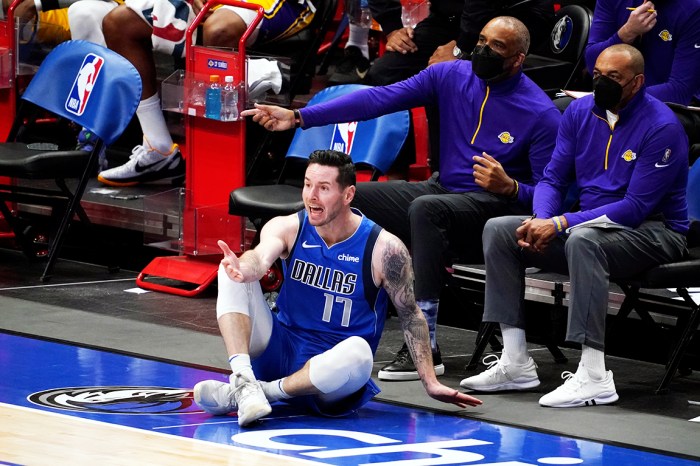 Redick is coming off the bench for the Mavs, but he’s a vocal leader, even from the sidelines.

Redick believes one of the best things about the NBA is building relationships with teammates and staff. He sang the praises of Mavs stars Luka Dončić and Kristaps Porziņģis, along with several of his other new teammates.

“There’s not many people at 7-foot-3 that can do what KP does, and Luka is as  good as anybody in the league at creating his own shot and creating for other people. I’ve been very fortunate to play with some great guys in my career, and those two guys are going to be at the top of the list for sure.

“The fact that [Jalen] Brunson is a really good NBA player is not surprising to me. I’ve been a fan of his for a couple of years. I did mention this on the podcast as well, but Dorian [Finney-Smith] I don’t think gets enough credit around the league for what he does. He’s incredibly valuable; super-low maintenance, works hard, great teammate. What a great dude he is. You need guys like that on every team.”

Redick has had plenty to say about his teammates on The Old Man and the Three, the wildly popular podcast he co-hosts with Tommy Alter. But he doesn’t limit himself to basketball: Guests range from athletes to entrepreneurs and business owners to politicians and educators.

“The great thing about the podcast for me is I get to learn something every episode,” he said.

Redick said his favorite player guest was DeMar DeRozan, calling the San Antonio Spurs star “awesome.” “He just provided a lot of insight. He was open and candid and told some great stories.”

Outside the league, his favorite guest was lawyer and voting rights activist Stacey Abrams. “I think she’s one of the most impressive people in the United States. Really sharp, really knowledgeable and really passionate about what she does.”

Redick got into the podcasting game five years ago. NBA insider Adrian Wojnarowski asked him in the summer of 2015 to write a few articles for his platform on Yahoo Sports. He turned that down — “I immediately thought back to college and writing term papers at the very last minute,” Redick recalled — but when Wojnarowski asked him to try a podcast, he gave it a go. He moved to the Ringer, then decided to launch his own production company.

“I knew if I was going to keep doing a podcast I knew I wanted to own my own podcast and own the IP and RSS feed and actually monetize the podcast which prior to that I never did,” he explained. “It’s way more work than what I was doing before, but it’s been very rewarding.”

In between producing the podcast and finding his way as a role player on a young, hot Mavs team, Redick continues to look onward and upward in life and relies on his faith to keep him grounded at all times.

“In our profession, you have a lot of ups and downs. You have ups and downs in personal life and in your professional life. You’re constantly being criticized and judged literally on a daily basis during the season,” Redick said. “Emotionally and mentally, that can take its toll. Everybody has sort of a grounding force, and in my life — going back to when I was child — has always been my faith, and that’s sort of the building block for which everything else in my life happens.”

Check out our latest NBA predictions.