Hundreds of anti-vaxxers gathered in the Utah desert to light an effigy of a giant syringe, as part of a “Night of Liberty” event that touted a veritable “who’s who” of local culture warriors.

The impressive wooden effigy was emblazoned with the words “MEDICAL TYRANNY,” and it rested against a barrel that was labelled “BIOHAZARD.”

Former police officer Eric Moutsos livestreamed the burning of the vaccine effigy on Facebook, and also posted photos, promoting the “amazing night” to more than 10,000 followers. He also posted the video to YouTube. “Obviously burning the giant syringe was one of the highlights of the night,” he wrote. “Literally burning the false god idol that’s being pushed on the world population by fear, coercion and force.”

Moustos first made a name for himself when he resigned from the Salt Lake City Police Department following his suspension for refusing to participate in the city’s annual LGBTQ Pride march.

Ammon Bundy was also there. Bundy, a member of the notorious ranching family known for armed standoffs with law enforcement, has lately found yet another cause celebré in anti-mask activism. Bundy also promoted the event, which took place last Friday, through the website for his “People’s Rights” network, an organization of far-right activists. 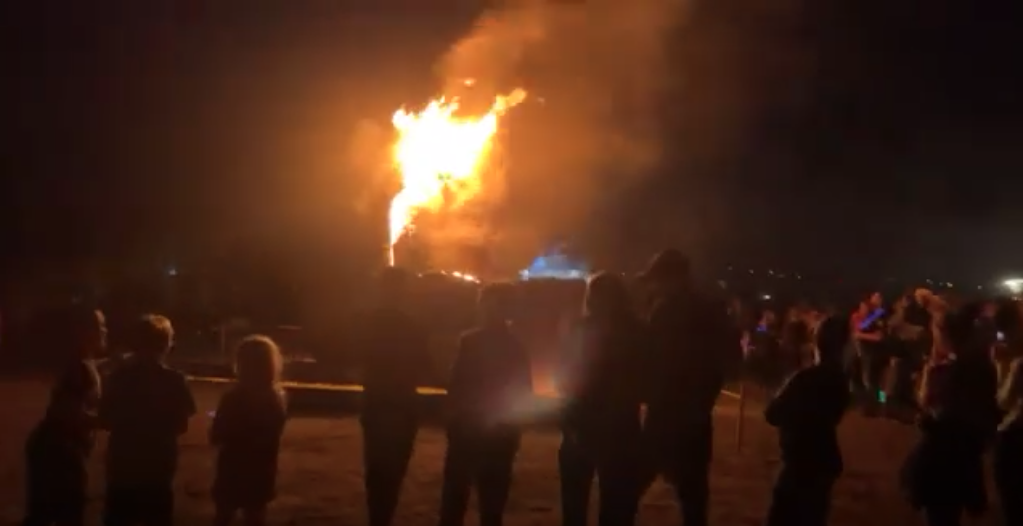 A crowd gathers to burn a vaccine in effigy. (YouTube)

Another advertised speaker was Utah State Rep. Phil Lyman, who was arrested and charged with a misdemeanor in 2014 when he led an ATV protest against federal land management through Recapture Canyon, a protected area of Native American cliff dwellings (he later received a pardon from former President Donald Trump.) And Natalie Cline, who sits on Utah’s Board of Education, was also scheduled to speak, according to the flier. In January, Cline publicly posted the name of a middle school teacher who she accused of “communism” and “indoctrinating” children.

When Moustos posted the video to his Facebook, people raved about the event in the comments section.

In addition to the effigy burning, a flier for the event advertised music, games,and a screening of the “Non-Essential” documentary, which is a compilation of testimonials from business owners who say they suffered repercussions from COVID-19 related lockdown orders.

The event took place only days before reports that the U.S. was unlikely to attain herd immunity, in part due to the circulation of new COVID-19 strains, but also due to persistent vaccine hesitancy.

New CDC data shows that vaccine rates remain particularly low in Utah. Just 25 percent of the state’s population have been vaccinated, making it the third-lowest in the nation, according to the CDC (Alabama has the lowest rates of COVID vaccination, followed by Mississippi).

Utah has long been a hotspot for anti-vaccine sentiments, even before COVID-19 hit the US and rejuvenated the simmering movement. A study from 2018 identified Salt Lake City and Provo as two cities in the US with the highest rates of kindergarteners whose parents had claimed “nonmedical exemptions” based on ideological or religious beliefs, to explain why their child had not been immunized.

Source: A Bunch of Anti-Vaxxers Just Burned a Giant Syringe in the Desert